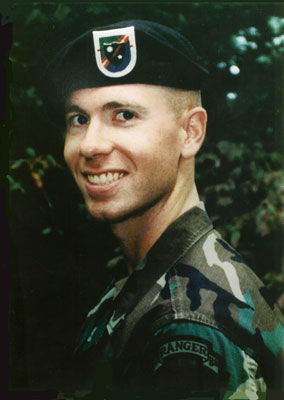 Private Greg Michael Belletti was born on July 22, 1974 in Lewisburg, PA. He leaves behind his mother and father Leanne and Ron Belletti, and his brother Allen Belletti. Greg enjoyed team sports, golfing, and hunting. He played shortstop and pitcher in baseball and forward in basketball in high school. He graduated in June 1992, from Crestwood High School, Roswell, GA. Greg attended Georgia Tech following graduation and one year at the University of Georgia before joining the military. Private Belletti died on October 30, 1995.

Hinesville – A young Army Ranger who had been part of the elite unite for three months died while on a training exercise in the Canoochee River at Fort Stewart in southeast Georgia.

Private Greg Belletti, 21 of Roswell, died Monday, said Major Susan Oliver, public affairs officer for the post.
Belletti was attempting to cross the river about 10:30 a.m. when he went under, she said. He was pronounced dead at 12:43 p.m. after he was taken to Winn Army Community Hospital.

The cause of death was not immediately determined, Oliver said. The exercise was part of routine training for the elite unit, but not the same type of water training in which four Ranger trainees died last February at Eglin Air Force Base, Florida, said Lt. Col. Ken McGraw, public affairs officer for Army special operations at Fort Bragg, N.C.

Savannah – An Army Ranger who drowned last year at Fort Stewart was weighed down by his poorly secured 21-pound machine gun, an Army report said.
Ranger Greg Belletti, 21, who was based at Hunter Army Airfield in Savannah, drowned during a field training exercise Oct. 30, 1995, when his squad was trying to cross the Canoochee River on poncho rafts.
“Belletti’s squad leader allowed Belletti to attempt a river crossing utilizing an improper method of securing his weapon to his body.” said the newly released report. “Belletti subsequently drowned.”
The report said a court martial will be held, but it did not disclose any names or disciplinary action.
The report said Belletti, of Roswell, apparently secured his M-249 machine gun to his waist instead of to his load-bearing equipment.
Moments after he entered the water on the Army post west of Savannah, he was separated from his raft and went under about 10 feet from the river’s edge, the report said. Several soldiers said they tried to rescue Belletti but couldn’t find him.
When Belletti was pulled from the water, the report said, his weapon was attached to his waist by a rope.
Army regulations call for using parachute cord to make a quick-release knot fro attaching weapons. Belletti may have used rope instead because he had run out of parachute cord, the report said.
Soldiers interviewed by the investigators said they didn’t receive a safety briefing before the mission, although their squad leaders did.
An autopsy conducted by doctors at Fort Stewart’s Winn Army Community Hospital called Belletti’s death an accidental drowning.