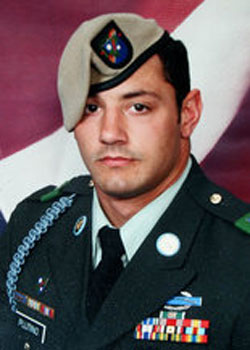 Looking down at a military photo of his son Sandrino on Monday, Sandro Plutino said softly, “He was so proud.”
Sgt. Alessandro ‘Sandrino’ Plutino, a U.S. Army Ranger from Pitman, was killed in action in Afghanistan Monday.
Alessandro “Sandrino” Plutino, 28, was in the final weeks of his sixth tour of duty as a U.S. Army Ranger when he was killed by enemy gunfire Monday in Afghanistan while leading his fellow Rangers in an assault.
Plutino — a Rifle Team Leader in B Company, 1st Battalion, 75th Ranger Regiment according to the U.S. Army Ranger Association — was serving his third tour in Afghanistan after serving three tours in Iraq.
“He should have been out in March, but he left on this special mission March 7 — he said he had to,” said Plutino’s mother, Dianne Hammond. “He always wanted to be in the Army. On his good-bye cake there was a picture of him at four years old with his wooden gun and camouflage. He wanted to leave high school when he turned 18 to serve, but I wouldn’t let him. Then when 9/11 happened, he tried to leave college, but his uncle talked him out of it. After college, he signed up.”
Hammond said she and her family spoke to Plutino Sunday night when he called to reassure them he hadn’t been involved in Saturday’s helicopter crash in which 30 U.S. troops were killed. Twenty-two of them were Navy SEALs that were rushing to help Army Rangers who had come under fire.

PITMAN — Sgt. Alessandro “Sandrino” Plutino, 28, was killed Monday by enemy gunfire in Afghanistan. The Army Ranger, a Pitman native, was due to end his sixth tour of duty in the Middle East later this month.
“He wanted to be a soldier forever,” said his mother, Dianne Hammond, at the family home Monday night.
“He believed that was his calling. I don’t think America knows how special these young men are.”
Plutino, a Rifle Team Leader in B Company, 1st Battalion, 75th Ranger Regiment, was on his last special mission before coming home again — for good this time, his family and fiancée hoped.
He had served three tours in Iraq after graduating from Wilkes University in Wilkes-Barre, Pa., and was on his third tour of Afghanistan. Hammond said the family last talked to him Sunday, when he called to reassure them he wasn’t involved in the helicopter crash that killed 30 U.S. troops on Saturday.
“He was set to get out last March, but he went back for a special mission,” said his older sister, Brenna.
“This was something he wanted to do. He was a true American hero.”
She said her brother wanted to join the military in high school and again during college, but her family talked him out of it then.
The 2001 Pitman High School graduate — who attended Elwood Kindle School and Pitman Middle School — began college at Western New England University in Springfield, Mass. He wrestled at Wilkes University, graduating in 2005 with a criminology degree.
“He was planning to go into law enforcement — maybe the FBI, the ATF, or a state trooper,” his mother said.
Plutino was also planning to get married to Natalie Layton of Glassboro, his sweetheart for the last 10 years. “He proposed on Jan. 1, and the wedding was going to be next August,” Brenna said.
Pitman Mayor Michael Batten, who coached Plutino in wrestling while he was in elementary school, remembered him as “a tough kid, but nice.
“It’s a real sad time for the family and the community,” said the mayor, who spoke about Plutino at Monday night’s council meeeting. A moment of silence was observed in his memory and Batten said the borough flags will fly at half-staff. He encouraged residents to fly the flag in Plutino’s honor.
Plutino is the second member of the armed forces from Pitman to be killed in the war on terror. Marine Cpl. Sean Kelly was killed in a helicopter crash in Iraq in January 2005.
Plutino is also survived by his father, Sandro, and a grandmother, Carmelina of Marina di Massa, Italy, as well as other family and friends. His grandmother is visiting for the summer and was looking forward to seeing her grandson, Dianne Hammond said.

I have pleasant and very fond memories of CSM Caro. He is a Ranger’s ranger. CSM was always attentive to what you had to say. After a company run, I saw him attending to his leg. I approach him and observed a wound on his shin that was draining and he was cleaning it with hydrogen peroxide. As we conversed and I inquired, CSM said it was a wound suffered from an AK-47 in Vietnam. If I recall, at this time it had to be late 1975 or early 1976. Point being, this soldier had been treating a fragile skin graft for many years struggling with a stubborn healing problem and fending off looming threat of infection. No doubt, he would always occasionally, need to attend to this personal care after most runs or any other strenuous exercises. No sick call, no medic, only disregard for himself and total care for his Ranger’s. In a similar way, memories of the Reforger Exercise in Germany, my weapons platoon was assigned to HHC company with CSM Caro. He organized use into a ‘Ready Reaction Force”. Those memories of going out at a moments notice and capturing the aggressor forces, driving up and down the German streets, eating together, joking together are all great times. There are many other fond thoughts of CSM Caro. I can honestly say he was very proud of being a member of the 1st Battalion and leading a fine bunch of ranger men. CSM Caro was truly an asset to the 1st Ranger Battalion, the U.S. ARMY, and a Ranger’s ranger! I know God has him on security duty in Heaven above. Hooooah! RLTW

Sergeant Alessandro Plutino’s dream of joining the Army can be traced back to a photo of him at age four dressed in camouflage and holding a wooden gun. Though he expressed a desire to serve when he turned 18 and then again after the events of September 11th, he was encouraged by his family to complete his college education. In May 2005, SGT Plutino earned a Bachelor of Science degree in Criminology and enlisted in the Army shortly thereafter.
SGT Plutino began his military career on August 2, 2006 in infantry with a Ranger qualifier. He completed Basic, Advanced Individual Training, and Airborne, before entering the Ranger Indoctrination Program (RIP). SGT Plutino graduated RIP and was assigned to the 1st Battalion 75th Ranger Regiment stationed at Hunter Army Airfield in Savannah, Georgia. On April 8, 2007, SGT Plutino deployed for his first of three tours to Iraq.

By 2011, in addition to his three deployments to Iraq, SGT Plutino deployed twice to Afghanistan. SGT Plutino was scheduled to separate from the Army in March of 2011, but instead left on a special mission to Afghanistan on March 7, 2011. SGT Plutino was in his final weeks of his sixth tour of duty as a United States Army Ranger when on August 8, 2011, he was killed by enemy gunfire while leading his fellow Rangers in an assault. SGT Plutino was 28 years old.

The death of SGT Plutino was a tremendous loss to his fellow Rangers, but the impact of his sacrifice would be everlasting. Fellow platoon members recalled his leadership in his final moments and how his actions saved the lives of the brothers he so loved. “He placed himself in the position of greatest danger to identify and destroy the enemy and, in doing so, undoubtedly saved the lives of his team members and the rest of the platoon,” recalled Greg Holownia, SGT Plutino’s former platoon leader.

“You always knew what you got with Sandrino,” said a friend and fellow Ranger Grant McGarry. “He was always true to who he was. A friend you could count on…He loved being a Ranger. He was a great man.”

It is with great pride that we name WCC’s Sandrino in honor of United States Army Sergeant Alessandro “Sandrino” Plutino. 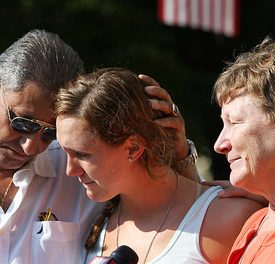 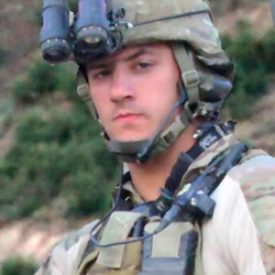